I do not often write when I am angry, this is an exception, but as a senior and long-time resident of the Bulkley Valley let me say you asked for it. The video at the bottom of this article is loud and clear, and sends out a message of outrageous arrogance.

Yes I am putting it bluntly, this is our back yard sonny, and even by your own laws you need to step up to the plate and make her your wife before you can assume the role of husband.

Both of you should be ashamed of yourselves, and as Clarence Louie said, you need to put on your man pants and start working for a living, you brought 2 children into this world and here you are freeloading on the backs of environmentalists concerned about protecting and environment that you two are both equally guilty of destroying.

You now kill moose and deer out of season, you did not grow up that way, and you grew up with 99% of everything you ate, wore and drink just like all the rest of us, it came from a grocery store. (I did not say your family never hunted, they may well have, but not as a sole means of survival.)

For those of you who do not hunt in the winter, the reason why the season is closed is to protect wildlife, killing wildlife in the dead of winter is like taking candy from a baby, and should only be done as a matter of life and death survival.

Now with a pint or two of aboriginal blood in you, you lay claim to freeloading for a living? Get a job you and support your children.

You want to play that game of yours and ours? You say your land, your this your that, ok let’s play that way.

It was OUR tarps, OUR lumber, OUR roads, OUR trucks, OUR cars, Our gasoline, OUR rifles, OUR Traps, OUR coats shirts and pants as well as boots. As long as you have your comfort, to hell with everyone, money grows on trees, so locals just need to go pick the cash up rather than work for a living.

BTW when I say OUR I do mean that of every working First Nations persons in Canada as well as all other Canadians.

Once you remove everything that is not primate aboriginal, the rest is yours, and you would not last a week without everything our culture has provided you with, inclusive of your education and it’s not likely you would even be in our back yard but for using our shared benefits.

We are not anti-Indian, we are not anti-First Nations, we love and respect them, they are our brothers and sisters in a valley we love and share. Its people like you who try sow divisions among aboriginal people.

But some of you are too lazy to work for a living, so you need a cause, and you found one, to stop the development of everything that gave you the shirt on your back and boots on your feet, the food you eat, the heat in your home.

Then you whine and bitch about a slap job set of makeshift tents with lumber and tarps, add words like cultural, and suddenly the tents become sacred? Hey kid you would not even know the meaning to the word cultural but for the education you got in a so called white man’s school.

You’re making a living out of race hate, using terms like immigrants, colonizers, illegal occupied territory, but hide your racist comments just enough so sympathetic people will fund you from needing to get a job.

Your not even from the Bulkley Valley and act as if your our savior, we don’t need you to stand for anything other than pulling your weight as a father and as a man. You really think that “script” earns you the right not to work for a living?

We were doing great before you came into our valley, and we will be great even if you pack your bags and go home.

Your parents gave you a chance to do something with you life via UBC, what did you do with that opportunity? You squandered it, all of your hopes, dreams, aspiration flushed down the toilet, and you make your kids the victims of your ideals.

What opportunity are you giving your kids? Pulling them out of society, putting them in a group of degenerates to lazy to work for a living?

You say you stand for the animals, but shoot and trap ones you do not even need for sustenance, its all about the pipeline. You are obsessed with halting progress and halting a future for all Canadians.

You stand for creation, but you build a resort for anarchists, with no regard for the environment, putting an excavator in a salmon bearing stream, really now? An excavator into the sacred headwaters, did you really do that?

Where does the sewage go? Through the sand and back into the river?

You do not fight for your children you use your children as props, your not so different from terrorist organizations in that regard, using kids as props.

Sonny until you win a war against Canada, it is legally the sovereign territory of Canada unless you prove otherwise in the only known and accepted method on this planet, that is through a judicial court. Right now you think a stupid blockade and anarchists will bring Canada to its knees, indeed you are delusional.

Your hopes are going to go down the sewer unless the people in charge go back to negotiations that some old men walked away from. Thank God some elected leaders in Witset had the wisdom and concern for the Wet’suwet’en people, and stepped up to the plate where the old guys who badly need to retire failed.

People like you are giving First Nations a bad reputation, unlike you most work for a living. Look at the history of the Wet’suwet’en, it was the influx of white man that started the trapping industry, back then it was a job, not a means to stop a pipeline.

Protesting is like getting drunk is something white man taught you.

Wet’suwet’en elders all worked for a living.  I say again get off you lazy hind end and feed your kids. Protesting is not a job, regardless of how well you hold down the script.

As I said in a previous commentary, you fools are simply too stupid to take time out to learn the law. Actually I should correct that, if you finished your BOA Degree you do know better and intentionally flaunt breaking the law.

What about the right of your kids?

I will post your own propaganda video, you watch it, from start to finish
and remember that punks face, and remind him to get a job

Forget welfare, man up to the job of being a father. You run a GoFundMe page to pay for your kids education so you can remain in the anarchist blockaders camp, putting your protest as priority over your child’s education. It’s not like you are forced to send them to white mans school either, they have an elementary school in Witset.

You have a tremendous ability to piss all over other people and what they all do wrong, why? We know why, your too lazy to work and be the responsible dad you should be. 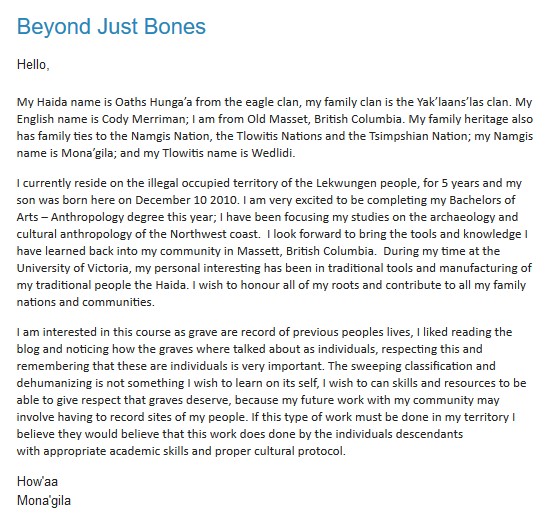 That article goes to prove you went right from school to skipping a life of work, and jumping right into protesting for a living.

And if your going to make a living posting stories online, you might want to hide the ones that tell the world who you really are.

Man up and get a job, so you can be a proud father as opposed to a shit disturber. Before you play it read what the law says.

“It is illegal to use, occupy or build structures on Crown land without prior approval. Penalties of up to $100,000 or the seizure of improvements, goods or materials may apply. The person responsible also could be billed for clean-up costs.”

If it was anyone else who did that we would have been fined, we would have had to pay for the cleanup, so consider yourself privileged, undeserving, but they cut you way more slack than they should have.

When I listen to the closing comments by these two, I have to admit I have seen bullshit piled deep, but this might well take the cake. These kids have no idea what life was like before they were born, before the modern luxuries they now live with. Like sitting in an outhouse where you have to push over the growing spike in the dead of winter. These two kids would be lost without all our modern day comforts.

And NO Cody, they are not afraid of you, they are simply more respectful than you are.

Now you have seen just how obnoxious these two can be, we should be asking them the question, “How can you two live with yourselves?”

It is without a shadow of the doubt that the RCMP are tolerating the verbal abuse from some very obnoxious people. We can only say we fully support the RCMP and if anything they have been far too lenient with these hoodlums.