Molly Wickham is one of Freda and Warner’s first recruits along with her husband Cody Merriman. Dating as far back as 2014 this couple decided to squat in a cabin that did not belong to them at McBride Lake and made it their own private home, in the name of environmentalism, even back at that time long before anyone in the Gitdumden Clan ever heard about these proposed projects, Molly was already claiming to speak for the Gitdumden Clan. As far back as 2009 during her University years she was already involved in activism, and panned her thesis around “A Tale with Two Endings” She did complete her University degree and was already on parade in Smithers with he child and husband in 2012.

Back in 2014, she was not even illegitimately adopted into the clan until sometime in 2019-20. These people are unbelievable, how they switch from Stellat’en First Nation to Wet’suwet’en then do the ceremony years later.  Today you now have her sister Jennifer also claiming to be Gitdumden Clan, to fit the narrative without even having an adoption.

*It is illegal to use, occupy or build structures on Crown land without prior approval. Penalties of up to $100,000 or the seizure of improvements, goods or materials may apply. The person responsible also could be billed for clean-up costs. 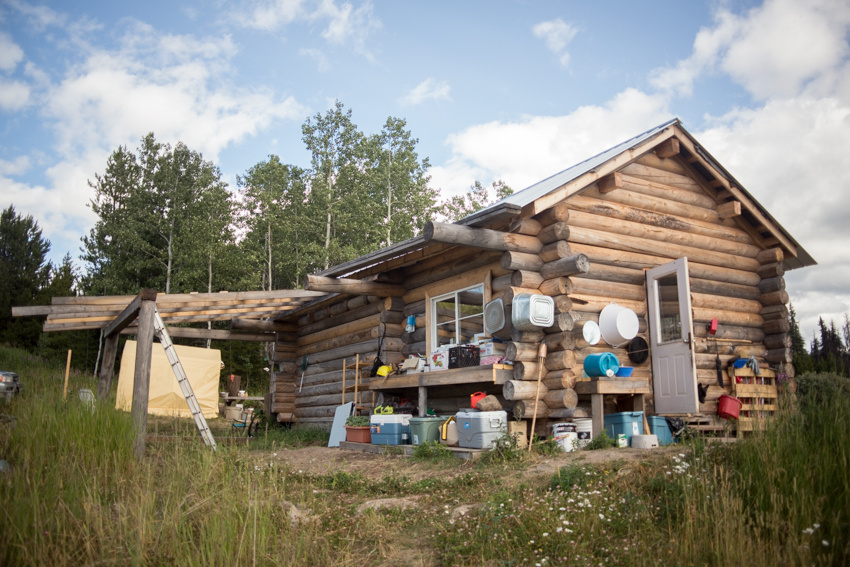 Wickham said she fears the practice of questioning Indigenous identity in a colonial court setting sets a “dangerous precedent.” Quote from the Narwhal

Really? I wonder why? 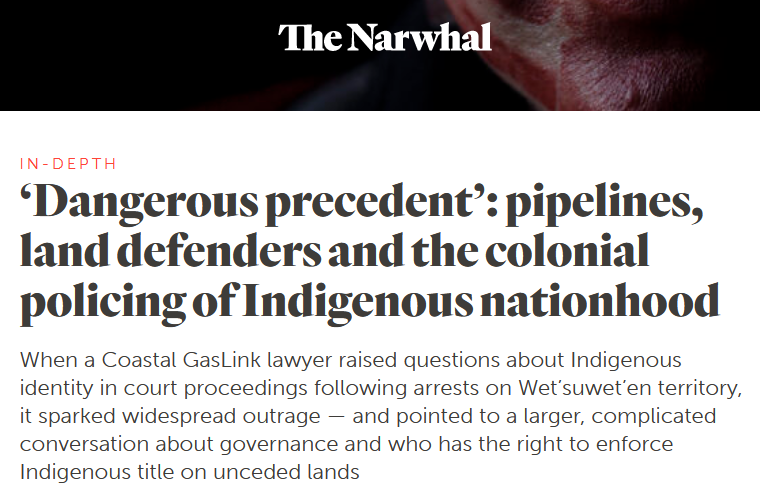 In fact it should be a standard rule that as part of your identification you must show this card. We are seeing far to much abuse by people who wish to belong to any band across Canada as a matter of convenience.

Molly Wickham, had her educations including university paid for by the Stellat’en First Nation. Stellako is located 160 kilometers west of Prince George, B.C. Stellat’en (people of Stella)

Its important to understand who exactly Molly’s and Jennifer are in relationship to the roles they play in today’s Wet’suwet’en affairs. The following will explain just how Wet’suwet’en they really are or are not.

Neither Molly or Jennifer grew up on Wet’suwet’en territories and are relatively speaking newcomers to the area.

For the sake of all the very good people in this family, pleased respect what we are writing, there are a lot of very good people that are related to Molly and Jennifer, but you would never know it from the way those two treat their family. Molly and Jennifer have very much disrespected their own matriarchs, so we must show continued support for them as they were caught between what government did to them, and now the abuse done to them by these family members. For that reason getting the facts correct was important to us.

Molly’s and Jennifer are the daughters of Don Wickham a white man who married June Wickham (aboriginal) whose maiden name is Augusta.

June’s parents on her fathers side was Eastern Carrier specifically Stellat’en First Nation. His name was Freddy Augusta. On June’s mother’s side was Emily Augusta, her maiden name was Isaac, and her June’s grandmothers name was Paddy Isaac with her maiden name being Tom. So to recap, June’s mom Christine Patsey married a Burns Lake man with the surname of Tom. Christine is half Gitsxan and half Wet’suwet’en. June was born into the house of Spookws or also known as the Dora Wilson Kenny house group, and adopted into unnamed non aboriginal household where she self reports to have been abused. We cannot deny that or confirm it so be that as it may.

Speaking to other family members, it was no secret that Emily, (June’s mother) had drinking (alcohol) issues, at that time when June was taken by social services due to the drinking issue. We cannot excuse the government of that day either, because government of that day failed to recognize the kids were safe and being looked after by the grandparents. Witnessed by other relatives.

By rules of matrilineal family Christine was Gitxsan on her mothers side and Wet’suwet’en on the fathers side, so both Molly and Jennifer Wickham by matrilineal rules are Gitxsan, even if that constitutes only a bloodline of a mere 12.5% Having said that its not what we are seeing, what we are seeing today is that whatever tribe gives you the most benefits, that’s the one you yourself choose to be. We have never seen anyone actually apply historical backed rules to this situation, its all about what is in it for me, and or GoFundMe.

One issue that stands out is if Molly and Jennifer made the claim we are white immigrants, it would be accepted as truth, if they both claimed they were Stellat’en nobody could argue that point, then if they chose to say they were Gitxsan nobody could challenge that, so now we have them claiming they were born Wet’suwet’en, who could argue the point? Imagine having citizenship to four separate nations. Somehow one element is forgotten here, they are cashing in on a protesters dream, to never work for a living, and to get rich anyways.

Does anyone other than me see there is something very wrong with this picture? Imagine if we allow abusive aboriginals to claim indigenous rights and title to all parts of Canada, what happens to the rights of honest law abiding local First nations members?

There is so much more history people need to be aware of, the following are important evidence of her out of control behaviour.

No violence occurred at Wet’suwet’en blockade One of the most successful fallacies perpetrated by these two couples with the help of SubMedia (subverted media) is the claim that everything done by police is violent, they are all victims in a Disney like porrayal of a non existent Indian tribe and the women are all  Pocahontas and about to be devoured by white society.

Canadian courts do not have any jurisdiction on Wet’suwet’en territory Imagine this if you can, does she actually believe this or is this part of the spin? We suggest based on her sucess as spinning lies has such a phenomenal track record of duping the public it turned her into a millionaire.

Today Molly works in partnership with Franklin Lopez the secret operative behind the internal war in the Wet’suwet’en family. A must see video is this one, where she admits her partnership with the devil incarnate. One cannot fully appreciate just how evil this man is unless you open the link and read his background information. He is using First Nations as his weapon to harm society. 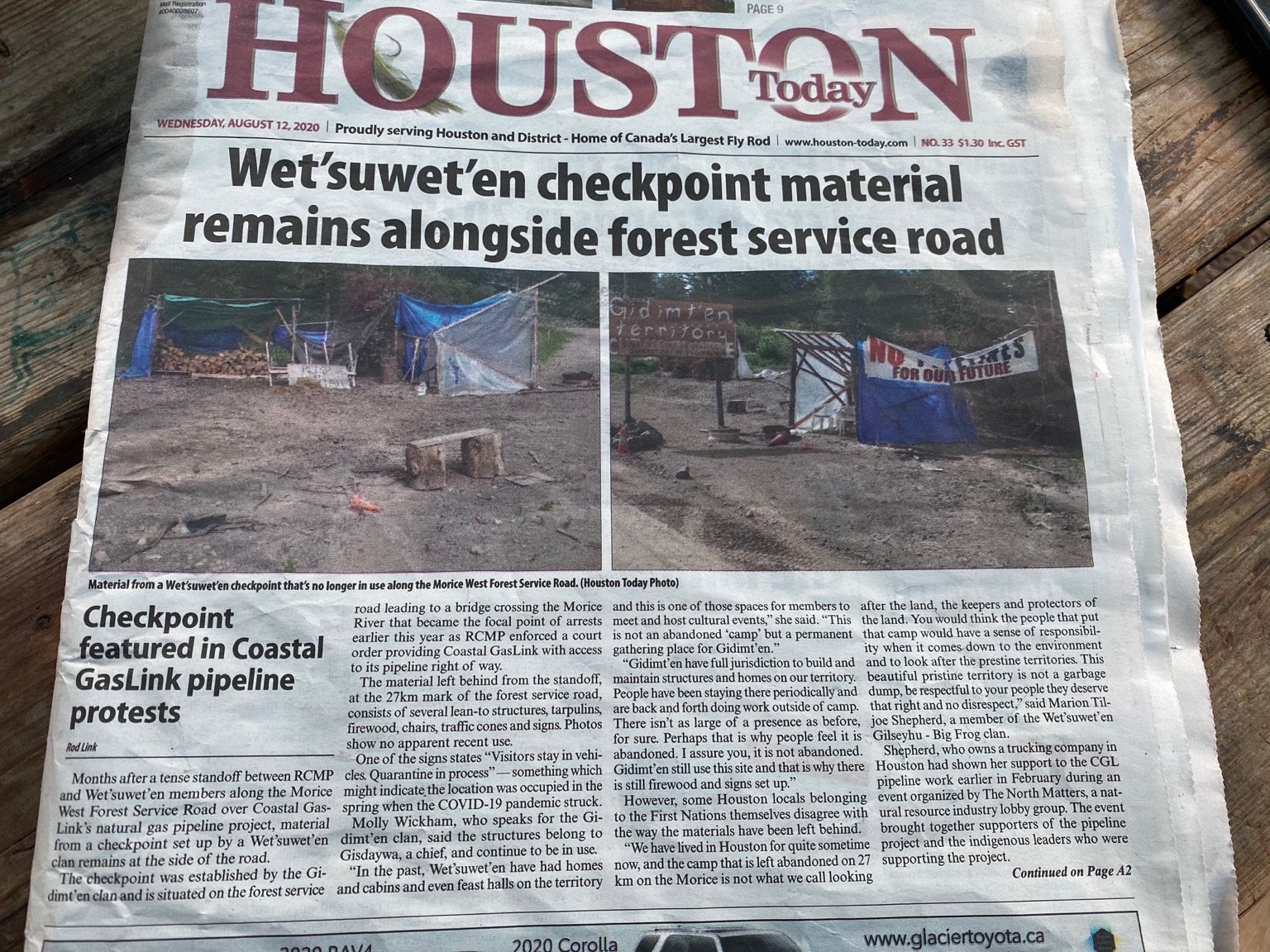 Racist Molly rants again, the venomous diatribe pours out of her mouth in social media. After reading that we question if she is losing her sanity? Remember there was nobody at the camp, and nobody in Houston ever reported being attacked by pipeline workers. Its pure vivid imagination or hallucination.