First things first, why is John Ridsdale listed as one of the Blockaders.

In mainstream media John Ridsdale may be best known as his role as leader of the Wet’suwet’en Nation, locally however he will likely be best remembered as a regular customer of the Legion looking at the bottom of a drinking glass. His working career is not very well remembered by anyone other than hanging out at the Office of Wet’suwet’en. Oddly no one I have talked to can remember where he has worked other than his own tale about working at Houston Forest Products for a short time when he was young.

Now he will be remembered as one of the two Hereditary Chiefs with a criminal record and a history of bad mouthing Canada, and taking money in return. It does fit the narrative of intentional confrontation with both the RCMP and CGL.

John Ridsdale (below) taking credit for stripping the names from three female hereditary chiefs in violation of Wet’suwet’en Law that dictates it is the only by the authority of the clan that any blanket (below that of Hereditary Chief, can be stripped.

It is only given after the Hereditary chief is dead, and it must be a person from the same house. (Taken from the Delgamuukw trial, screenshot given from testimony regarding this very issue.)

More on the same issue (bottom half of the page) can be found here. 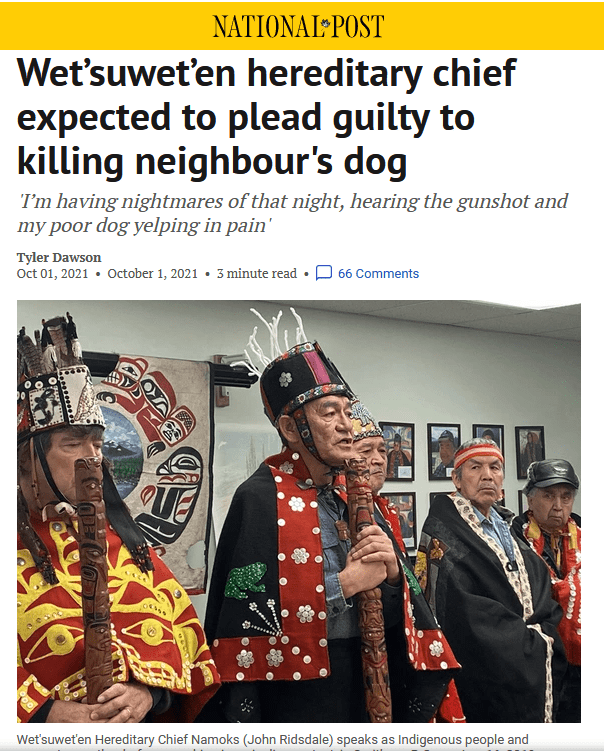 A MUST READ – Did John Ridsdale outwit the judge?

“A local Indigenous court led by elders had asked the outside courts to handle the matter because they considered it “too politically sensitive,” said defence lawyer Michael Murphey.

Prosecutor Kristina King said the Crown might normally have asked for a jail term because the circumstances were “so serious,” but mitigating factors justified the three-year suspended sentence instead.”

Seriously? “Too politically sensitive,” gets you off the hook for a serious firearms violation?

“The lawyer also noted that his client’s suffered the effects of having one parent who suffered horribly in residential schools and another who was dispatched to a farm at an early age to provide what was likely free labour. Ridsdale himself escaped being sent to one of the schools because his parents had the children hide in the bush when authorities came to collect them, said the lawyer.”

John Ridsdale is 63 years old, compulsory attendance at residential school ended long before John was born, compulsory attendance ended in 1948. John would have had to be older that 73 years of age in order for his story to be true. Yes residential schools did operate here the Lejac Residential School closed in 1976, however contrary to the claims made in order to get him off the hook for his criminal offences his parents would not have had to hide him as per his claims, unless he lied about his age and he is actually over 73 years of age. Seriously John went to the same elementary school I did only many years later.