Its been a while since we posted any updates, as a norm I don’t like using titles like I just did but given the lack of any better accurate description it will have to do. The following is a compilation of various issues we have seen over the summer so far.

These low life activists are too lazy to get a job, so they gravitate towards finding ways to avoid working but still finding ways to get to their real objective, cash for nothing, (via all the GoFundMe’s) by being anti society and anti civilized while claiming they are here to save the world from ourselves. The primary two excuses being played today is anarchism equating to being supportive of First Nations, the second is anarchism in the name of saving the environment.

Anarchism for clarification meaning trying to wipe out Canada as a nation. All the while using American Funding to do so.

They by nature cannot work within a democracy but are the first to scream about society violating their rights, and they mostly do not give a damn about First Nations that do not support their agenda, and gravitate and exploit the few shit disturbers that float near the surface.

This summer we entertained the notion of archiving the website, as it did its job, a lot of local uniformed people now understand their own culture a lot better, they now know how they were and continue to be swindled, its now time for the people to do something about it, kick out the outsiders and take control of their own nation. Its the individual aboriginal nations who have the right to self determination and not a few cheating self appointed chiefs. I feel we did our job, that was exposing the truth against all odds, David vs Goliath, and we did what we were intending to do.

If we are not dealing with a small number of local “Shit Disturbers” then we have to contend with those who lead them on, the Climate Cultists, and they are back, on OUR turf.

Over the summer so far there really was very little of real consequence to report to our readers, the CGL pipeline is going in on schedule and the pipeline will safely be drilled under the Morice River. (New schedule and new funding, lots of it) I am still trying to determine if this latest action was a means to self promote the Greens, or the phony Chiefs who stole their titles, or if it was purely a means to get people to open their wallets one last time. Maybe they were sick of the pope getting all the attention and wanted media to focus on them as the GoFundMe’s seemed to indicate most of the world stopped caring about these local jackasses who are still covering up and protecting men who sexually assaulted their own women.

Somehow there are still a lot of very uneducated people that are part of this anarchist movement who think that there will be an infestation of live alligators that will surface if the pipeline breaks. That these alligators will wipe out all of the salmon on the west coast, its panic time people.

Just kidding, but its about as stupid as the arguments they come up with, that black oil will ooze out of a pipe that has no oil in it.

They keep calling themselves land defenders, its the one thing they have never done, they never held the line anywhere, they did surrender in front of cameras for the purpose of making money. They poop and pee everywhere on the ground they call sacred, then say the water is something you can drink.

They bitch and whine about the police, yet they intentionally take actions to invite the RCMP to make arrests. They are self admitted anarchists under the guidance of Franklin Lopez, meaning they fully intend to destroy our communities and our way of life,  like all sewer pipes all these groups lead to the same septic tank. This summer has been no exception. They complained so much about the daily raids and the police statement in regards to the camp being the source of criminal activity, only to prove the police correct when the following incident occurred on July 26th 2022.

From the RCMP Report (see this article)
“That’s when people from the camp surrounded the police vehicle, the Mounties said. “Several individuals climbed onto the police car, some rocked it and one person kicked at the car, while others attempted to assist the man to escape,” the release stated.

This is gangster or hoodlum (gangland style) behaviour, somehow these political idiots (Green Party) seems to think, this behaviour is acceptable in our society.

The other day I was listening to the wise words spoken by a well known Gidimt’en matriarch about how one of the protesters are using the police action as a means for self enrichment, like the daughter of Chief Woos, now renamed herself Josey Shadows. (for the new GoFundMe)  Here is the quote “Her mom is from Cheslatta. If we follow the matrilineal line she is not Wet’suwet’en. She is Frank Alec jr and Geraldine’s daughter. Geraldine’s mom is from Cheslatta. Someone needs to teach them what the matrilineal line means.””

Her real name is Josey Alec and she is still at the time of this writing is the sidekick of Corey Jocko the Mohawk anarchist. One of the issues that keeps haunting the real Wet’suwet’en people, is that incessant repetition by these shit disturbers of asking for money in the name of a people that despises the idea of begging for money.

This seems to be the case for most of the so called Wet’suwet’en shit disturbers, they preach tradition but do not follow tradition.

As someone once said, its the money, its always been about the money. Don’t miss our article Million Dollar Molly 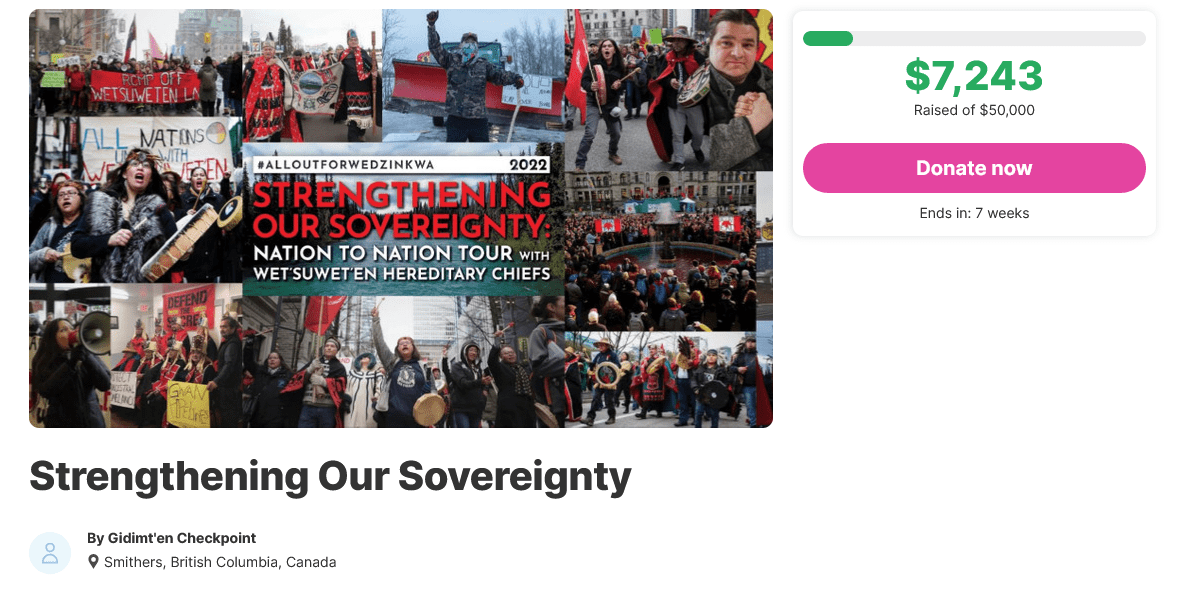 Peace and Unity Summit hosted by the Wet’suwet’en Hereditary Chiefs. Really? So why were the only chiefs there Jeff Brown and John Ridsdale? Suggesting this was a project by the Office of Wet’suwet’en is an outright lie, if they were hosting it they would have been there.

Then we have the BC Green Party showing up to compete with Nathan Cullen (not invited) and only talk to the hand full of Wet’suwet’en who oppose the pipeline to insure they use aboriginals to further their own goals to satisfy members of the climate cult. Even when invited they refuse to meet with members of the Wet’suwet’en nation who supported the pipeline. Adam Olsen and Sonia Furstenau came here to try get some publicity by rafting down the river with mostly NON-Wet’suwet’en climate cult members, in order to attack the potential future NDP leader Eby.

Adam Olsen who was for self serving political reasons also said he was part of a group of 30 people who went up the Morice River to do exactly what? Seems to me he forgot to mention that he was part of that group that tried to blockade police.  30 people block RCMP vehicle at northwest B.C. pipeline site as protests continue. July 26 incident led to two more arrests; police seek suspect who allegedly kicked, damaged cruiser

But he is not alone, this group appears to have the markings of a planned attack on CGL with well known professional shit disturbers in the forefront of this last ditch GoFundMe project.

Part of the Green Party (Eco Cultists Party) was its new leader Sonia Furstenau who was also part and party to the obstruction of the RCMP, how its possible for these people who defy our laws get to sit in our legislature sets a new low for permissible behaviour. Also not to be left out of this cultist movement is the man who formerly ran as a Smithers town counsellor is Phil Brienesse,  hosted the Greens at his home a few days ago as their local representative. Also in attendance was none other than Kai Nagata who was part of the Adam Gagnon group blocking CGL and damaging their equipment, as well he runs Dogwood, another Tides funded professional shit disturber. It begs the question if he too was part of the 30 people obstructing the RCMP?

“Approximately 30 people, some using their own vehicles, blocked the police vehicle from moving until reinforcements from RCMP detachments in Houston, Smithers and Burns Lake arrived” 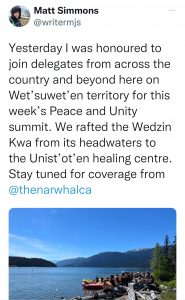 In case you do not know who Matt Simmons is, he writes for The Narwhal, one of those anarchist, Climate Cult Websites, Matt’s position at The Narwhal is made possible by the Local Journalism Initiative. In plain English it means we the tax payers are footing the cost of him being here to cause trouble, participate in action against our RCMP and we are stuck footing his bills. Anjali Appadurai is the climate-justice lead at Sierra Club B.C. (another Tides funded organization) and also where Taylor Bacharach comes from.

It is entirely inappropriate that tax funding (the Local Journalism Initiative) is used by persons intentionally breaking the law by obstructing police, even if they were not charged for doing so.

Next we have Anjali Appadurai and Tracey Maynard, both full time professional Climate Cult leaders for wait for it…….  The Climate Emergency Unit, a project of the David Suzuki Institute. Is anyone surprised that name David Suzuki Institute comes up. They were also part of that group of 30 that obstructed our RCMP officers.  Anjali Appadurai is the climate-justice lead at Sierra Club B.C. and the NDP candidate for Vancouver Granville.

Then from Narwhal “The guests of the chiefs — which included Cedar George-Parker from the Tsleil-Waututh Nation, several other Indigenous leaders, Sonia Furstenau and Adam Olsen, from the B.C. Green party, Severn Cullis-Suzuki, executive director of the David Suzuki Foundation” 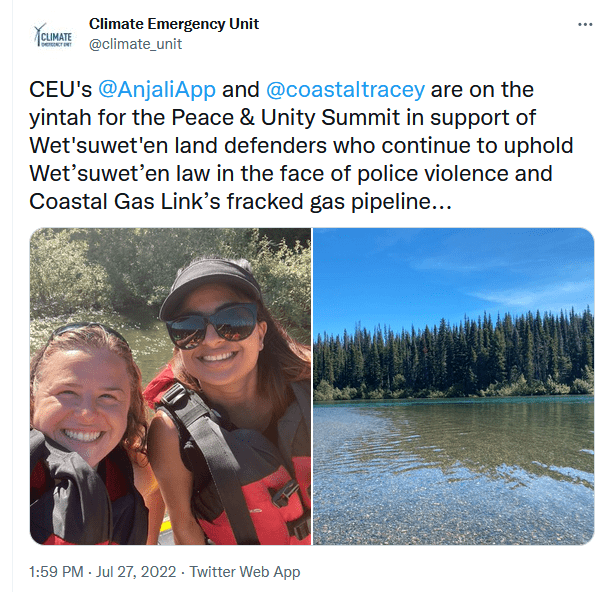 Not one to miss the boat Amanda Follett Hosgood was also party to that group of 30 and party to that “Peace and Unity Summit, including a float down Wedzin Kwa. While on the territory, their guests witnessed the arrest of two land defenders by RCMP.” So was she also one of the 30 blocking the RCMP? 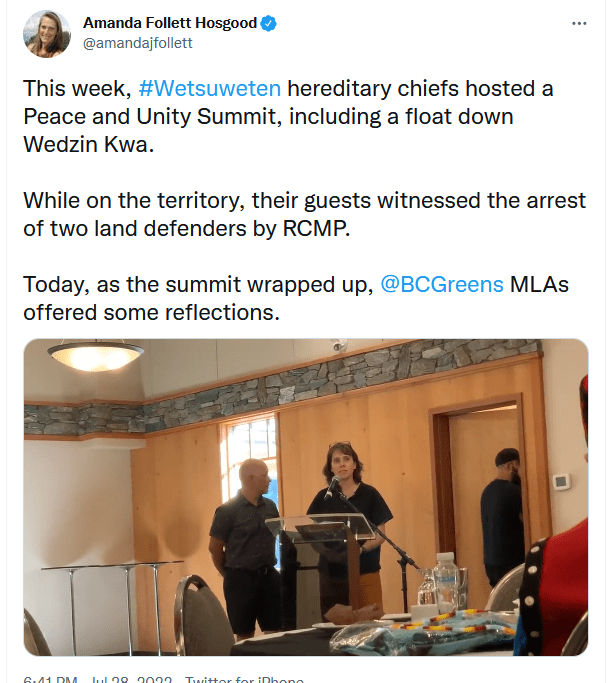 Also in attendance was Simon Stockner, one of the raft guides with Skeena Watershed Conservation Coalition, that is also funded by the Tides Foundation.

Next we have Logan Staats showing his support for a man who was blocked from using a potlatch to forgive himself for what he did to another Wet’suwet’en by his drunken act and wilfully shooting her dog inside the village. It was his own clan members who shut down the attempt made by John Ridsdale. 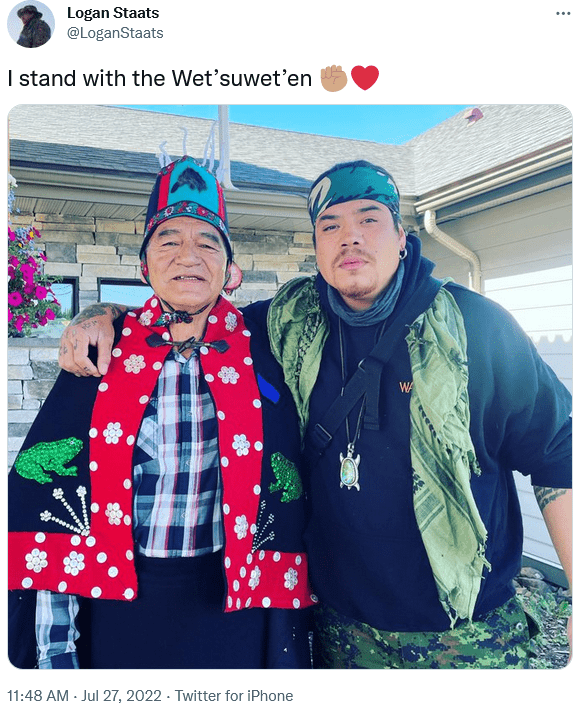 Now you know the rest of the story. 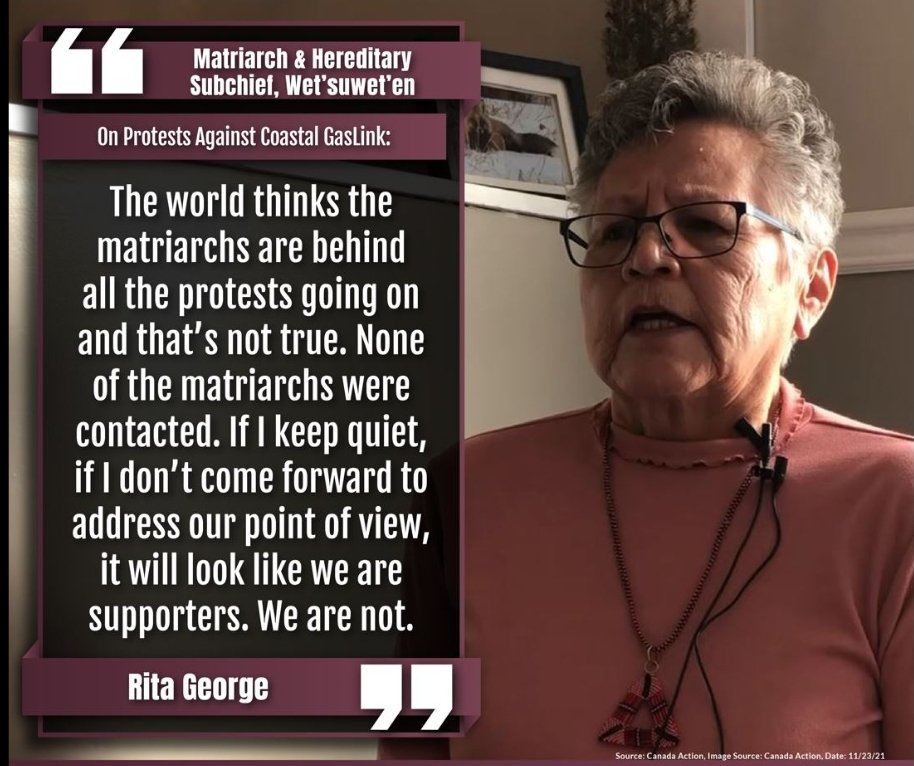