As the guest speaker at the University of Victoria, Saturday, Jan. 19 2019 it would be fair to say you made yourself a public figure, so public criticism is fair play. 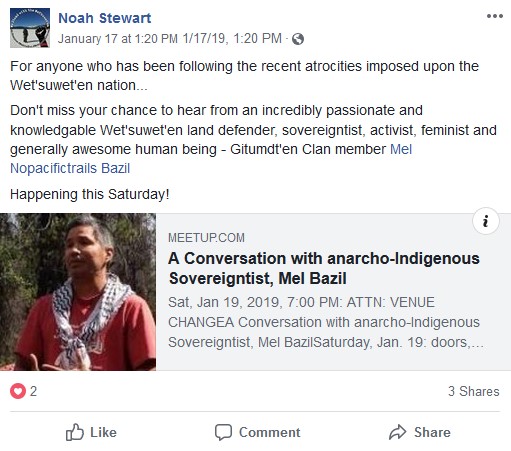 First let me tell you what we have in common, we were both born in the same hospital in Smithers with the help of colonizers. For this article I will use this term created by aboriginal anarchists, because we cannot call them immigrants if they were born here like Mel and I were.

We both grew up in poverty, your family like mine would have seen some very bleak Christmas’s if not for colonizers organizing food hampers. My father worked hard every day to lift us out of poverty, it was not as easy for your family, but your mother worked hard at putting food on your table. The one thing she had aside from the willingness to work was the respect of those who knew her.

Back in those days even the hereditary chiefs of that time disrespected your family, and for the longest time denied your family their fishing rights, and forget about any hereditary title, it was not even an issue back in that time. We were all just doing our best to survive, and yes First Nations members took the brunt of poverty as they still do.

Back then title was a grab bag to get the most for each family and not much concern was given to the less fortunate.

Oddly enough a lot of money came and went into the reserves, some did well while others got nothing.

Publicly I have never heard Lucy use the word colonizer, but I heard a lot of gratitude by her towards people regardless of their background race, a true legend in her time.

I have nothing but respect for Mel’s efforts to fight substance abuse, and fully support your efforts in creating the Bear Clan Patrol, the best solution to ongoing substance abuse problems in Smithers, however it would even be more valuable in Witset, maybe to replace the police that have to go there often daily due to violence.

While you fight the wars of the world, home continues to suffer.

On one speaking event I was blown away by how you recognized that people from all over the world are indigenous, it’s the one thing we all have in common. You spoke with such passion, dignity and respect for all people you had me captivated. You were shall we say spot on when you say colonization impacted our people. I saw that in your and my family as well, you say you are also from Irish blood, and your mother and sisters all married colonizers as their safety blankets, no disrespect intended, and it continues into the next generation.

It happened in my family too, without the hate we now have a more diverse family.

Yet part of what you say is a walking talking contradiction, the very system you despise is the system of your bother-in-laws, aunts uncles cousins and nieces. It was those very colonizers who put an end to the brutal wars among aboriginal people both during and prior to their arrival. Yes they made many mistakes, but they could not get advice from Facebook and Twitter like you can now. You use the terms genocide and ecocide, however reading oral history by hereditary chiefs shows how clans manipulate clans by forcing your own women to marry into rival clans.

Even you must be aware of the Kweese war on Kitimat B.C. It was by every account a brutal slaughter of revenge by one nation against another.

My point is it was a different time, you cannot use today’s logic to curse or justify what our people did back then. It seems also that when it comes to injustice done to your people or family there is a lot of race based forgiveness involved, and a lack of forgiveness based on race.

You went from positive actions to explosive hatred that you share publicly now. You get into creative history when you spoke about going to Muhiem School and how as a child you refused to respect the flag, seriously that is either intentionally a lie or extremely delusional on your part. Indeed you’re a good story teller but not quite as accurate when it comes to truth or real history. Your story about the banquet box really comes from Haida Gwaii and is not Wet’suwet’en. They call that artistic license in some circles, and deceit in others.

For those of you wondering where this is coming from on my part, it is a result of a taped speech Mel made to people interested in becoming anarchists.

You hate both the government of Canada and British Columbia, who represent you within the lands we know by country and province. Do you understand the meaning of sovereignty?

It does not matter if you do or do not recognize Canadian sovereignty, what matters is there is nothing you can do to end it other than to spend your life complaining about it, anarchists have been around since the dawn of time, few if any changed anything in other people lives, while they destroyed and wasted their own.

Yes other anarchists will make you feel wanted and respected and that you will defeat the sovereignty of Canada, while back at home, nothing changes for the better.

Mixing myths with reality to buy people minds, people who put their trust and faith in you, is a heavy responsibility Mel. By your own traditions there are severe consequences for those who mislead others for their own objectives.

As a self-declared anarchist you contradict its very meaning when you say you recognize the laws of the Wet’suwet’en. Canadians now come from all walks of life and all ethnic origins, you cannot even label them white any more.

I can well imagine how it sticks in your craw that we have lots Indians in parliament but not many indigenous ones. The ones that do get elected are mostly accused as traitors.

Is it because they were mature enough to understand that we cannot undo 37 Million people? Do you think 37 Million people would allow 5.5% of the population to divide Canada up into 634 nations?

What would you do with the 37 million non-status Canadians?

As much as you dream of turning back the clock, its pure fantasy.

Anarchists have been around since the dawn of time, but I think you already admitted you’re really just an angry Wet’suwet’en. Fair enough, but would you not gain more from working with your own people and families to settle land claims legally? Has it never occurred to you that when you demand all, you often end up with nothing? In 21 years what exactly is preventing the settlement of land claims?

The cat is now out of the bag, the hereditary chiefs quit, they self admittedly have abandoned their claim to Wet’suwet’en lands. They decided to become protestors instead and work for AMERICAN environmental organizations.

At very best your efforts amount to venting, that’s alright too, it’s perfectly legal, and yes costing taxpayer more money, money that could be spent on improving your life or that of your family and friends. Seriously the hate that is spilling out of you right now is hazardous to your health, and that of those closest to you.

Maybe its advise all of you protestors need to hear, if your health is failing, it could be a result of all of your negative nature.

Here is some good advice, take it or leave it, a code I live by.

Mel, I mean no harm by saying what I did, and wish you all the best, if you return to helping those in need both in and or outside of your community. You are good at it, your people love you for it, and you have so much more to give, as opposed to waste.

Mel take the time to hear what you said, and look at the truth, clearly your better at story telling than you are at telling the truth.

“The Colony of British Columbia was founded between (1858–1866) British Columbia did not join confederation until July 20, 1871. The creation of the Indian Act 1876 and it was after that time, in many cases decades later that band offices were created.”

A lady, an elder, and example for all people of all nations, I have and always will regard this woman with great respect. I might be wrong its a guess on my part she was referring to Dutch immigrants, when she used the words “Nether people”

Words you might want to live by,  from the lips of Lucy Bazil.

“In the old days the white people used to deal with us. Today we learn from the white people. When the Europeans came here there was no prejudice in my time, neighbors were all white in Houston. Indians and whites got along in those days, respected each other as they were very poor too, their country was torn apart by war and they were given leased land in this country. Now the government is selling those lands again. We did not sell it, the government did. White men that bought it worked hard to clear it. They had only a suit case and started with nothing.

Today we should look at people the same way. It was not Indians who sold the land, the government sold the land. The white man paid big money and is still paying taxes today on it. It was not an easy life to leave their countries, to survive they came here, we should respect them. Younger people are different, showing prejudice against white, and white born prejudiced against other people as they don’t know the history. The Nether people said the Indian showed us how to fish, hunt and garden; the Indian had big respect for Nether people. In the old days the white people suffered a lot, Nether people cleared that land. Nether people worked for $1.00/day only. White people respect that, worked hard for their money, no bulldozers, only saw and axe. Our people worked hard. We always must look at our ancestors, if not for them, we would not be here today.

People with names must be respected, elders, now don’t do that. I try to talk with my great grandchildren but they don’t want to listen to me. That is how it is turning today, must know our ancestors.”  Gguhe’ Lucy Bazil-Verigin (March 20, 1920 – April 1, 2015)