Before I post this story I wanted to say we sat back on this national news story for more than 24 hours hoping the national press would do their jobs, and yes we know they were notified. That said I can only surmise they did not run it for racist reasons or fear of being labeled racist for running it. Nonetheless its a story of both national interest and importance.

So I have to bounce around a bit due to legalities in regards to what I say and how I say it.

Here is what we know so far, we know the name of the people involved but for now will withhold her name as a courtesy of being a victim in this. This lady claims that a very intoxicated male was staggering down the street, came to her residence and shot her dog. That person is allegedly  Chief Na’Mox also known as John Ridsdale. We are unclear about why he did this other than part of the conversation was about a dog barking at around 12:30 am. This incident occurred in the Hazelton area, in particular it was in the Hagwilget village on reserve land.

Allegedly based on her comments, police arrived after being called and entered John Ridsdale’s home where he was arrested and allegedly all his guns were taken by police. We have no information of if these guns were properly stored or if John had proper licensing to have them.

The dog died despite being rushed to a veterinary clinic. They did try to save it, but the dog died due to its injuries.

As John was the mastermind and primary driver behind the stripping of titles of the Wet’suwet’en Matrilineal Coalition, three legitimate hereditary chiefs for the crime of having a different opinion on how to deal with the CGL pipeline. locally Chief Na’Mox also known as John Ridsdale was often referred to as the head of the gang of five male hereditary chiefs.

Many local residents are now publicly commenting in social media asking if John Ridsdale remains fit to serve as a hereditary chief even among his known former supporters.

Tradition would have a potlatch or public meeting at which only the hereditary chiefs would speak, nothing in hiding, open for all Wet’suwet’en to witness, however due to COVID they chose to have an emergency meeting on Zoom, however instead o making it available to all citizens they held it in private last night.

As recently as January 24, 2021 The Canadian Press was still reporting

Na’moks said he has been at home near Smithers ever since.   (Actually he lives near Hazelton at the Hagwilget villiage)

Very little seemed like it could draw attention away from the movement but a global pandemic met the threshold.

Nearly one year later, talks between the hereditary chiefs and the provincial and federal governments over a rights and title agreement are behind schedule but ongoing. With the pipeline excluded from the agreement, however, tensions remain poised to rise again as work continues and the consequences for both resource development and reconciliation hang in the balance.

“We’re still in it,” Na’moks said. “It makes it difficult. Who expected a pandemic? But that doesn’t mean we’ve stopped.”

I do note the problem appears to be with the police (in regards to the story not being in the press. Let me quote ” Cpl. Madonna Saunderson confirmed the killing of the dog and said an active investigation is focussed on the “careless use of a firearm in a residential area. She said the file will be forward to the BC Prosecution Service for charge assessment, but that no futher information was available at this time.”

So its the RCMP who are hiding the names of the people involved.

Chief Na’Mox also known as John Ridsdale has a court date of April 23rd 9:30am Hazelton. Just what part of that is the mainstream press finding illegal to publish? Come on CBC, CTV, Global take off your kindergarten gloves an publish a real news story. You all published his anti CGL stories ,now stop the coverup and tell Canadians the truth for a change. 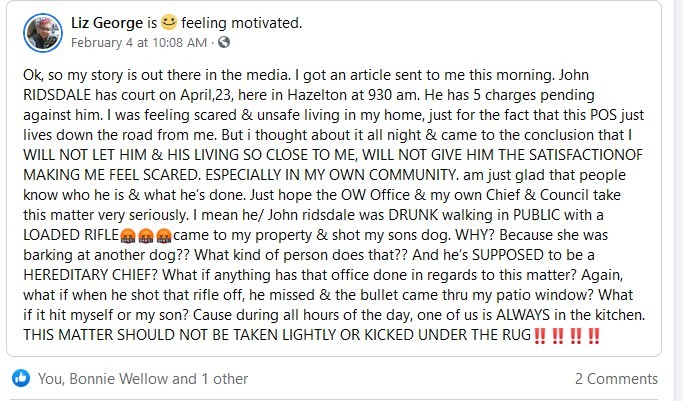