Was it the cold weather, has both paranoia or hysteria taken over the so called Gidimt’en Checkpoint?

Are they intentionally creating fake news to cover up for what was supposed to be large united group that has crumbled away to leave the Wickham sisters without supporters?

“In an email to CBC News, parent company TC Energy said it had confirmed that “opposition groups had departed” from a forest service road and a Coastal GasLink drill site on the Morice River on Monday.” “Work is safely resuming along the Coastal GasLink project route after the holiday break.”

On Monday, RCMP E Division spokesperson Dawn Roberts told CBC News that “no additional resources” had been sent to the area. “We are not aware of any need for an enforcement action.”

So there never was any police action planed despite the Wickham sisters announcements.

Lets look at some of their announcements, it begs the question did cold weather result in everyone going home? And to hide it they are now fabricating these crazy stories? Was this yet another GoFundMe gimmick?

Next to explain the story we ran yesterday “Disappearing Act? No more blockades! ” the following was their explanations, that still fall short of explaining how removing barricades, making a school bus disappear, making a potable tiny house disappear equals maintaining the blockade against CGL. 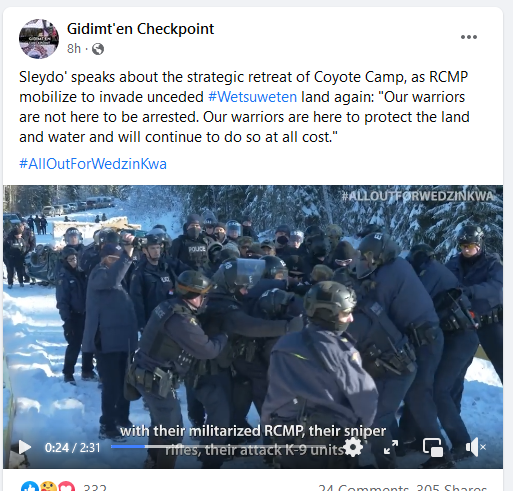 January 4th, 2022 – Unceded Gidimt’en Territory, Smithers (BC):
Two weeks after Wet’suwet’en water protectors evicted Coastal GasLink workers and occupied a key pipeline drill site, water protectors executed a strategic retreat to avoid arrest and violence at the hands of dozens of militarized RCMP. Before a large scale mobilization by police, water protectors vanished into the woods, evading police violence and criminalization. We expect an imminent assault on our people at the direction of Coastal GasLink as we continue to occupy and utilize our yintah.
“Our warriors are not here to be arrested. Our warriors are here to protect the land and the water, and will continue to do so at all costs,” stated Sleydo’ (Molly Wickham), a wing chief of the Cas Yikh people. “Every time that the RCMP, the C-IRG, has come in to enforce CGL’s injunction they have done violence against our women. They have imprisoned our Indigenous women and our warriors. We will not allow our people to be political prisoners.”
For the fourth time in four years, the RCMP appeared to mobilize for a large-scale assault on unceded Wet’suwet’en land, booking dozens of hotel rooms to bring police from throughout the province to facilitate pipeline construction and to assert control over unceded lands at gunpoint. Water protectors have blocked drilling beneath Wet’suwet’en headwaters for more than 70 days. In the last couple of days there have been increased patrols by non-local RCMP, C-IRG, and helicopter surveillance over private Wet’suwet’en residences far from any project worksites.
After the first 56 day occupation, RCMP made 30 arrests before escorting Coastal GasLink workers into Coyote Camp to bulldoze and burn down several cabins, homes, and structures. Within a month, land defenders retook the site, once again evicting CGL workers and blockading the drill pad. Arrests were also made at Gidimt’en Checkpoint, a re-occupation of our traditional village site on Cas Yikh yintah that is not impeding Coastal GasLink work.
“We know that we have to uphold our responsibilities, and no matter how much they try to beat us down we will never forget who we are as Wet’suwet’en people. We will always uphold our responsibilities to Wedzin Kwa, to our yintah and to all of the future generations,” stated Sleydo’.
Wet’suwet’en people have never ceded or surrendered the 22,000km2 of traditional Wet’suwet’en land to British Columbia or Canada, and have proven in the Supreme Court of Canada that Wet’suwet’en ownership of this land remains unextinguished. Our hereditary chiefs fought for years within colonial courts to protect our yintah as they have done on the land since time immemorial. Under Anuc nu’at’en (Wet’suwet’en law), House Chiefs representing each impacted Wet’suwet’en group have banned Coastal GasLink from Wet’suwet’en lands, and in 2020 issued an eviction notice to the company that remains in effect.
Since 2019 the RCMP have spent over $20 million criminalizing Wet’suwet’en authority over our lands, deploying in military garb with drones, helicopters, ATVs, snowmobiles, mobile command centers, and K-9 units. RCMP have pointed sniper rifles and assault weapons at unarmed Indigenous people, and used physical and psychological torture techniques on water protectors engaged in non-violent civil disobedience. To date, police have made 79 arrests, including four Wet’suwet’en Hereditary Chiefs.
“I don’t think Coastal Gaslink, the government, or the police understand that the Wet’suwet’en have been here for thousands of years. Despite all the money and effort C-IRG and CGL utilize in an effort to get rid of us, we are never going away. Ever,” says Sleydo’.
Media Contact: Jennifer Wickham, Gidimt’en Checkpoint Media Coordinator 250-917-8392″

That leaves us still with more questions than answers, one thing is certain, they will not ever tell the truth. We suspect it has a lot more to do with the recent B.C. Supreme Court’s ruling, a real game changer. Had these blockaders caused further delays its entirely possible they could sue the existing GoFundMe accounts for their losses.

“CN Rail has won the right to privately pursue criminal charges against three people who participated in a 2020 rail blockade in northern B.C., despite the fact that provincial prosecutors declined to get involved. The ruling cements the B.C. Supreme Court’s ability to enforce court injunctions, with or without the participation of Crown prosecutors, who unsuccessfully fought the decision.”