I was browsing some of the old footage that is still out there today and I come across this amazing video, amazing because people actually believed what they were saying in it, other than Molly Wickham who knew the media was buying this MS (moose poop) hook line and sinker. Watch this video to about the midway point, then watch the video blow it, before you continue, and you will see what I mean.

If you are from outside our region, you probably are extremely concerned, however if you are a local, it sounds more like the police burning down a valuable banana plantation, and these radical environmentalists are are right out of a Bambi and Gentle Ben movie where the police are about to shoot Bambi and sell of Gentle Ben’s paws for Chinese medicine. Thank God we can still get our bananas at Jerry’s No Frills.

The entire video is so absurdly fiction, its hard to find any truth in it al all. If you don’t believe me listen to what one of the original Delgamuukw litigants had to say. In particular read the written transcript, its below the video on the given link.

Holy cow if I did not know any better, I would be hiding from the police out of pure fear for the Gestapo fearing I might be next on their hit list. Thank the good lord I do live local, and have an inside scoop on every days happenings by locals I know and trust. But you really need to see the spin doctors at work here, you have to give them credit, they can turn frozen moose manure into 24k gold ingots. 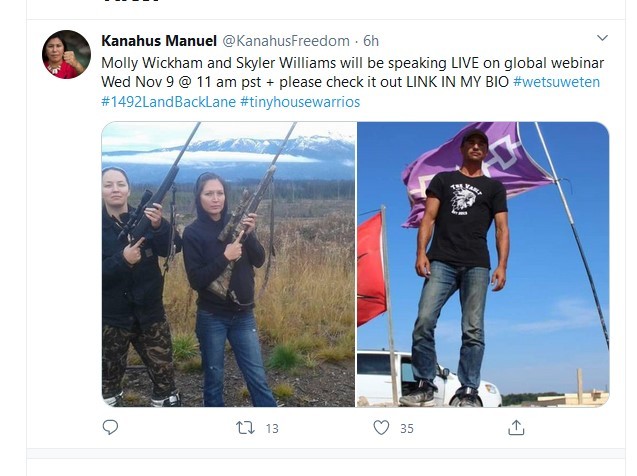 Also check out this story; The contempt continues’: Land Back Lane spokesperson could be on hook for $20M damage claim these folks are habitual criminals.

These people (hooligans) came from across Canada, mostly white kids, there was an unknown number of heavy rifles in and around the blockades, there were lots of threats online by people in and out of the blockades. Note “dozens were arrested” and Molly is a Wet’suwet’en chief and matriarch. (This kid is a matriarch? ) Partly true, she is a female and she is old enough to go to jail, but most certainly is not and may never be recognized as a matriarch by the Wet’suwet’en Nation. Listen to the rhetoric, its thick as bugs on a bumper mid summer on the road to Deace Lake. Three raids, can you believe it? Only one has photos and video, anyone want to guess why?

Who do you think is packing heavy lethal force firearms?

Listen to Molly Wickham who is not Wet’suwet’en by birth. Under Wet’suwet’en law may not speak for the Wet’suwet’en Nation. (Read Eagle Down is our law) Listen to her talk about “our” laws as if she owns them.

Listen to what her matriarch aunt tells her in all three parts of being corrected. Molly Wickham gets correction from a highly respected Wet’suwet’en “Gidimt’en” matriarch. – Pt.1

Molly Wickham gets a lesson in Respect for Elders – Pt.2  and Remembrance Day – The War to End all Wars – Pt.3

“I want the world to know why I am stepping forward as a matriarch,” the trim, curly-haired 80-year-old said in an emotional interview at the Pleasant Valley Cafe in Houston, B.C. “The world thinks the matriarchs are behind all the protests going on and that’s not true. None of the matriarchs were contacted.”

In the Wet’suwet’en culture respect is earned, not self declared, likewise age and track record speak volumes in regards to respect. Listen to what Rita George (Gulaxkan) has to share with the world. Gulaxkan speaks “In our silence people think we are behind them (Molly and Freda) it looks like we are their supporters, we the matriarchs are NOT behind them. And its really hurtful and its not the way of our ancestors, what they are doing in our name.” Not exactly what she said but its exactly what Gulaxkan meant. Take the time to hear or listen to her video.