Nathan I think I speak for a lot of people when I say this, Nathan your a big boy now its time to grow some ……… stop trying to play both sides of the political fiddle. You either support the majority of the Northwests residents, or you don’t and you support those who think its ok to bully society into agreements. Its not negotiations, its extortion, have the kahunas to call it for what it is.

The following letter is a reply to your letter of concern regarding a disturbing event that took place in Hazelton. Funny, if I recall right there were two events, the first was an eviction notice on your office, this was followed by a meeting with those who evicted you and then we have the subject of this conversation. A disturbing video that you watched, of the arrest of two of your constituents. Well read the RCMP reply and below it we posted that video, without the theatrics of the screaming woman who was obviously hysterical. The second guy who was arrested did so for trying to tackle the RCMP for arresting the first guy, watch the video.

The commissioner said the two individuals were arrested for violating CN’s civil injunction against obstructing their tracks. “The Royal Canadian Mounted Police (RCMP) is legislatively required to enforce the injunction of the court. In each case where an injunction is being breached, we make considerable efforts to avoid active enforcement and instead work towards peacefully resolving the conflict through engagement and negotiations,” Lucki wrote.

Quoting the Interior News – Nathan Cullen’s letter to Brenda Lucki comes after his eviction from Hazelton by Gitxsan chiefs
“In the letter sent to the RCMP top cop in Ottawa, Cullen asked about the RCMP’s “enforcement behaviour” while referring to a “disturbing” video in which two young men were arrested with “undue force” last month near the New Hazelton rail tracks.”

SO, without beating around the bush you accused the RCMP of using “undue force” maybe you can tell the RCMP what they should have done, or better yet tell your constituents exactly how the RCMP should have dealt with enforcing a civil injunction. 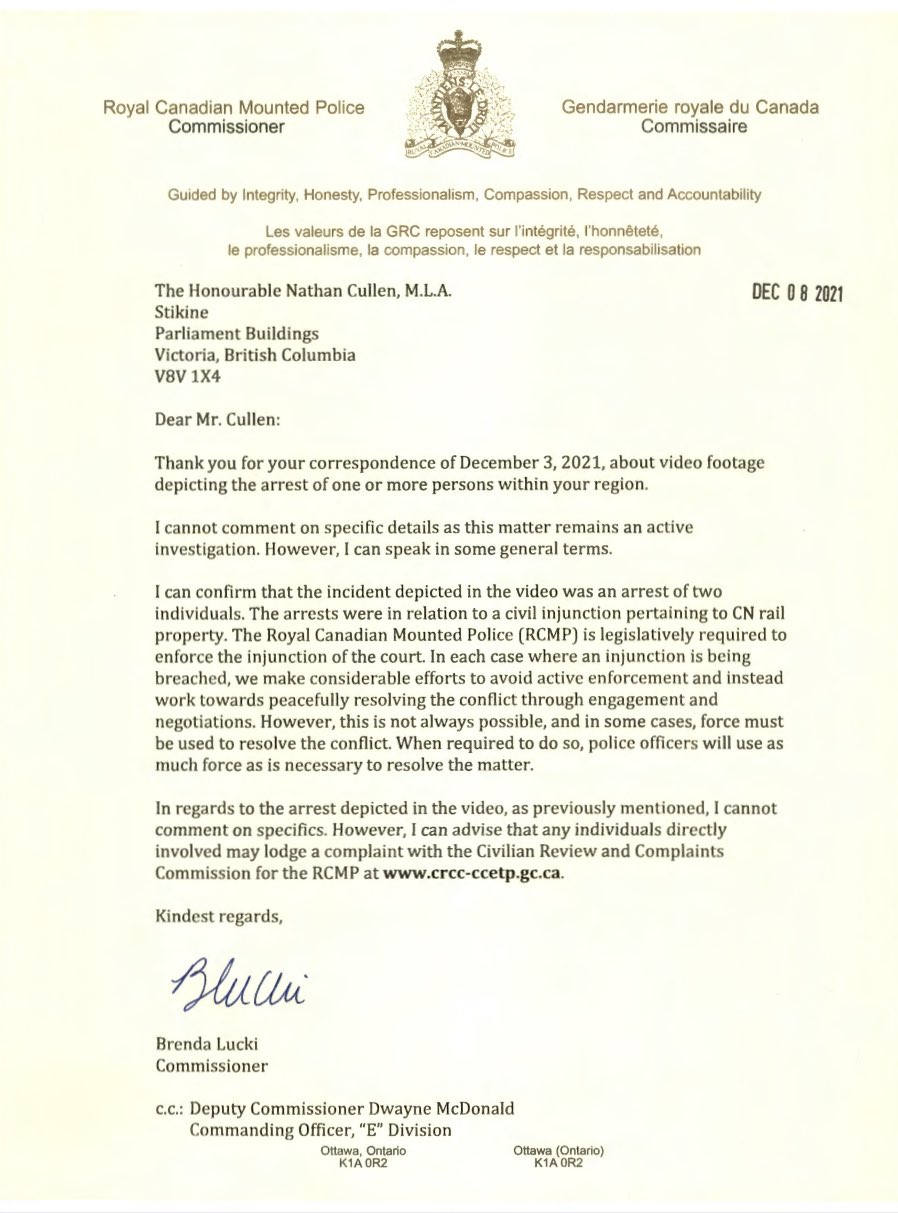 The video was from one of the protesters who was clearly hysterical, yelling that police had no right to be here. Seriously? No right to be here to remove blockaders from a rail line? Then to claim they were violently arrested? Did you see an officer punch the guy out cold? So they could put his hands behind his back to put on the handcuffs? NOPE he fought the police every second he could and you have to hand it to him, he lasted quite a while. As for the “I CANNOT BREATH!” try yell that 3X at the top of your lungs, when you cannot breath, seriously? I have taken medical training in this field and his airways definitely were not compromised based on his ability to scream.

The vocal theatrics were the only part of that video that were violent. Play it over and over, at no time was there a knee on his neck, as some of the liars out there are claiming, trying to cash in on the George Floyd’s death.

If you have to be honest Nathan, would you not agree that the police should have arrested that screaming woman who was clearly interfering with an arrest as well? Should you not be commending the RCMP on doing this job without tasering the man who you can really say was asking for it? He was refusing to allow police to hand cuff him, maybe you can suggest a non violent way to get them to comply? Fly at it Nathan the floor is yours.

OK after you watched the silent version, now watch the same video with the audio theatrics. The only thing that is disturbing is the hysterical woman. Listen to the language normally heard in loggers camps, it hardly sounds like a person who is decent. Even YOUTUBE age restricted the video due to the screaming, how amusing. Sorry but you will have to watch it on YouTube, their rules not ours. The only difference between the two identical files is one has no soundtrack, and the one YouTube is age restricting is the sound track, so its clear the trauma is the sound effects of the screaming woman.